Dave Ratcliffe Piano
John Lewis: The Bridge Game, Vol. 2, 1984/85
September 2022
In the 1990s, I began making transcriptions of John Lewis’ improvisations—call them Variations on a Theme—from some of his recordings playing all of Book 1 of J.S. Bach’s Well-Tempered Clavier. Previously published in the Transcriptions section are Prelude No.4 Variation, Prelude No.5 Variation, and Fugue No.10 Variation. Now I have taken another by-hand transcription from the nineties and finalized a representation that far exceeds what I wrote out by hand years and years ago. This is John Lewis’ variations on a theme of Prelude No.16 in G minor. Included below are three versions of this.
This is the 1990s by-hand original transcription

When I wrote the transcription by hand in the 1990s I worked from the basis of hearing the timing of the notes as swing eighths. What I realized in making the current transcription is that not all eighth notes played off the beat are swing eighths. From this I understood the need to break up half-beats into sixteenth note triplets where there was a two-thirds/one-third feel—or one-third/two-thrids feel—to the notes played. Even so, there is still the challenge of accurately notating the feel of the playing.

Here is a playback of the final version with tied sixteenth note triplets notated as one eighth note: 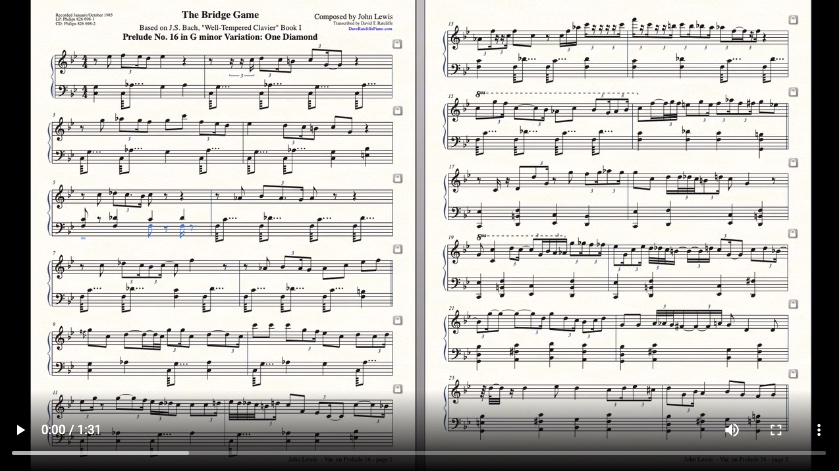 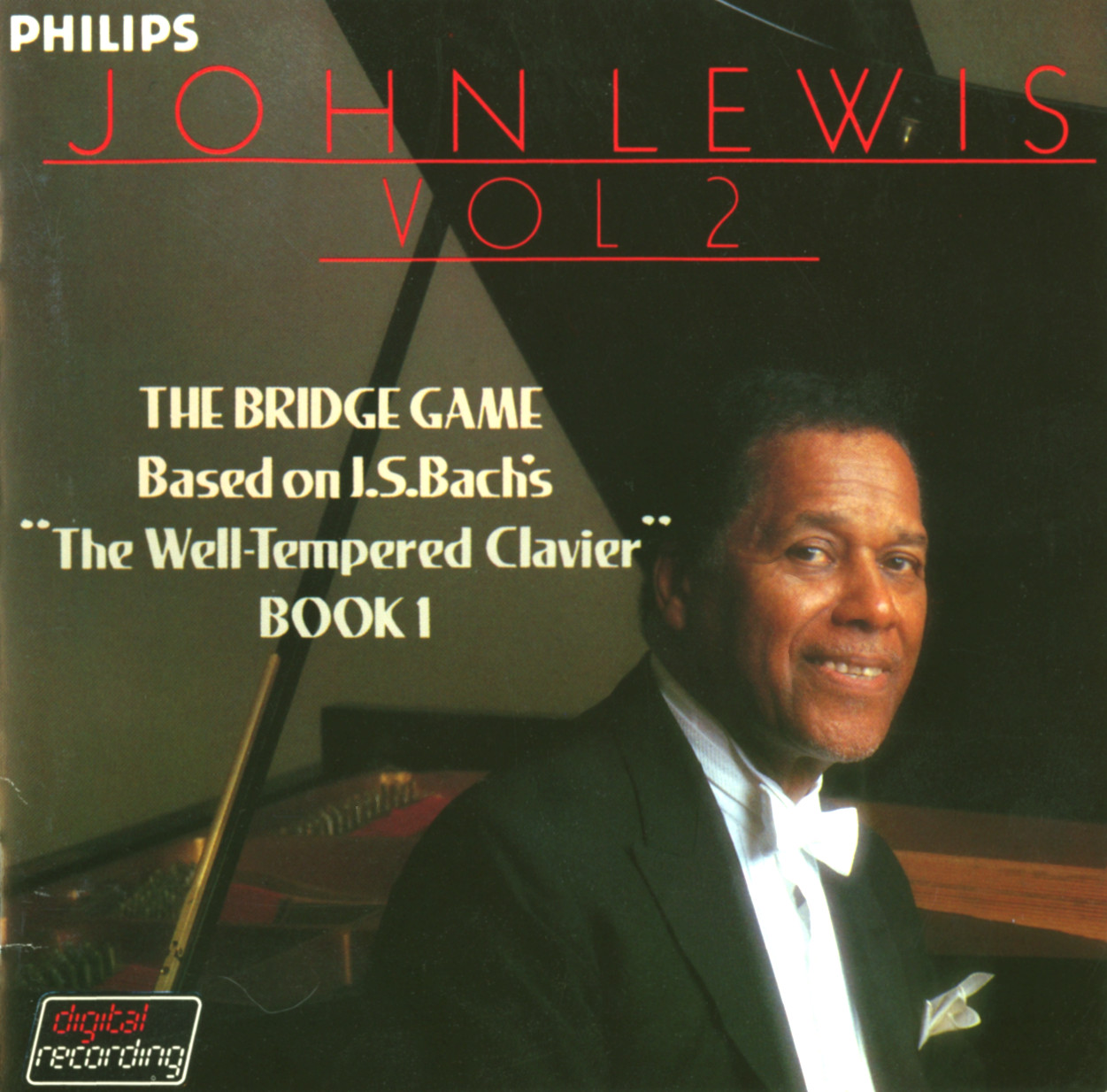 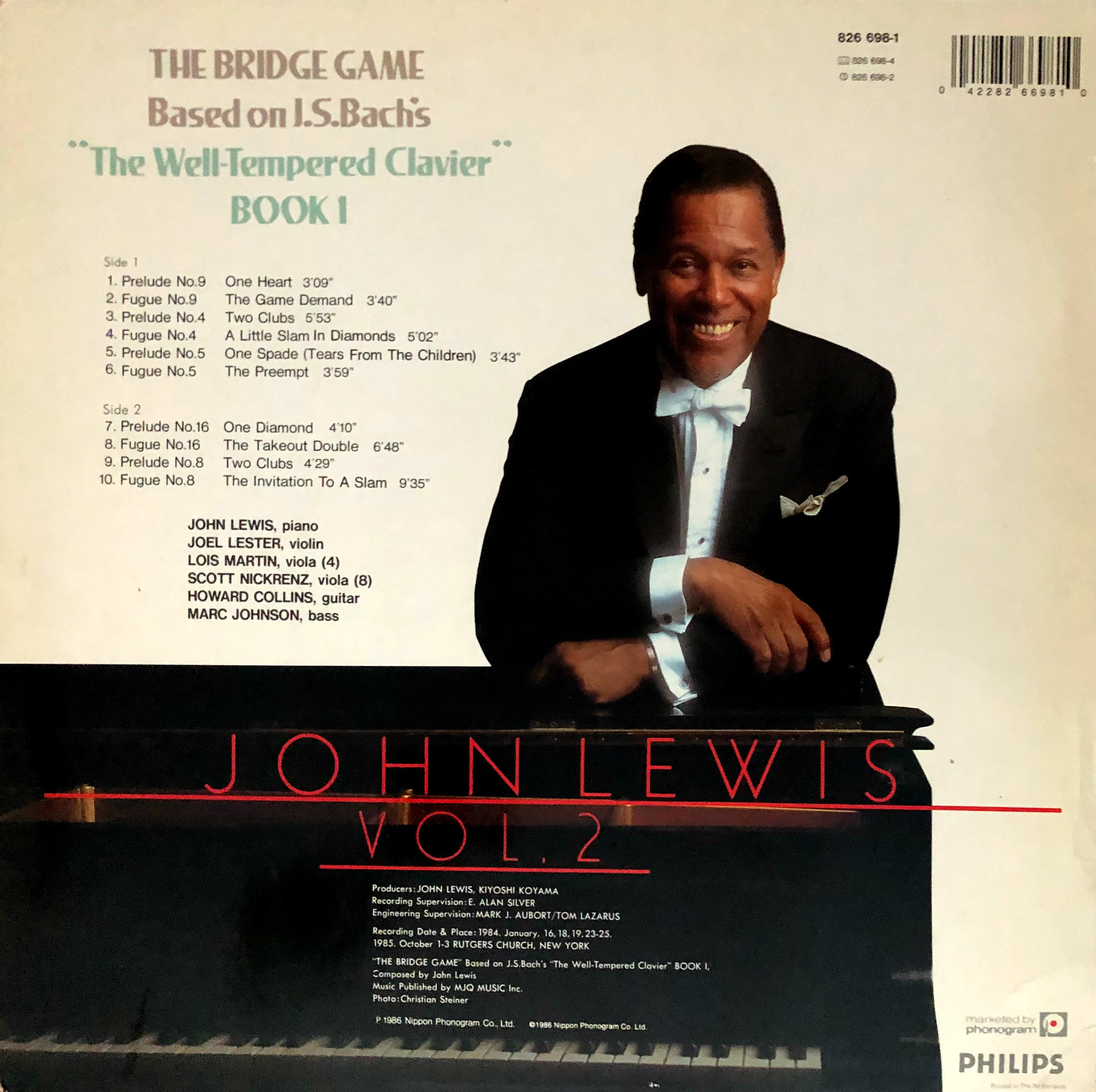 I was very pleased with the first album. I feel that it is still the most wonderful sound that I have ever heard in all the recordings I have made, the best piano sound I know.

I received very good responses, mainly from classical musicians, and of course, from ordinary people who seemed to have enjoyed it very much. I recently had a chance to speak with Mr. Meana, a conductor and a classical bassoonist from Italy, and he was very excited about the album. I am still excited. The album also received very good reviews in newspapers such as the Daily News in New York, and in magazines as well.

When I was in Vienna on tour last summer, I was surprised to see the album on display in the window of a very big record shop. I also saw the record on display at a record shop called Orpheus in New York where I often go to buy classical records, and at Tower Records.

I can listen to the album over and over myself, and it is something I can live with for a long time.

Having completed this second album now, I am happy to say that I am pleased with it, also. Compared to the first album, there are several new things in this album.

First of all, there is a solo fugue, where as there were only solo preludes in the first album. This is because although it is a true fugue, I felt it resembled more of a prelude than a fugue. I also thought it would be a little more difficult for the instrumentation I had chosen, with quicker notes for the bass.

There is also a fugue which uses a solo viola, as I enjoyed the viola on the first album. On that album, the violist was a young lady. This time, the violist is an old friend of mine, Scott Nickrenz. Our relationship began 25 years ago when we first performed together and met each other for a very special concert and a recording commissioned by Record Hunter, a shop in New York which was run by other people at the time. They had commissioned a piece for the Modern Jazz Quartet and a string quartet from myself and Gunther Schuller. The pieces were also commissioned for a concert at the Town Hall, and it was at that time that I met Scott for the first time. Ever since, we have shared a nice mutual admiration for each other. He is a fine violist and is also the owner of a tremendous viola, the Amati, which is from the 16th century. He has been doing much producing, such as the chamber music for the Spoleto Festival, in Italy, New York and Charleston When we recorded this album, he had just returned from Australia.

The sound of the bass is also something new on this album that I like. I also feel that Howard Collins, Marc Johnson and myself have grown even closer together from the first album with this difficult music we’ve had to play.

For myself, it was a big problem to find a way to improvise in the 9th fugue, the short one at the end, without destroying Bach’s unity. I was pleased with the result. The 8th fugue was also very interesting. I had to find ways to make it work interestingly without overpowering it, because it is a very long fugue, and to make it too long with what I was to add would destroy it. I think it worked out well, with three improvisations in the right places. The reason for three improvisations when there were only one improvisation per piece in the first album is that I wanted to exploit all of the ideas. Therefore, I took the first part of the subject and used it for improvisation and took the second part of the subject and used it for improvisation. In the last section, the idea is inverted by Bach In the original, the idea starts from the top to bottom and then near the end of the second part, it is used the other way. Interesting enough, the way Bach uses this reminds me of a popular song called FEELINGS. If you listen to it, you will be able to hear it. Except for the solo fugue, the other fugues in this album have two improvisations, all inspired by the subjects.

The most challenging thing in this album was probably the solo fugue. I had to work hard to make it clear and clean, to play it and make music. It was a difficult piece to play

Lastly, I am flattered and very pleased to hear that Keith Jarrett has remarked on how he liked the sound of the piano on the record and thought it to have a beautiful tone. Hank Jones has also told me he was particularly taken by the way I had made transitions from the written material to the original material. I truly appreciate such compliments.

As I have already said, I am very pleased with this album. There were some interesting preludes I had started on before it was decided what would be on this album, and as I have some interesting ideas, I am already looking forward to the next album.

John Lewis was born on May 5, 1920, in LaGrange, Illinois, but was brought up in Albuquerque, New Mexico. His interest in music began early; he began studying piano at age 7. Jazz Musicians who played in Albuquerque, such as the great tenor saxophonist Lester Young, made a great impression on Lewis during his childhood years.

All throughout his study of anthropology at the University of New Mexico, music remained an important part of Lewis’ life. After serving in the army during W.W.II, Lewis pursued music, playing and arranging for the Dizzy Gillespie orchestra, and also playing with Charlie Parker and Miles Davis. Lewis studied theory and composition at the Manhattan School of Music; the advanced studies he completed there — with an M B A — familiarized him with European orchestral repertoire and enabled him to acheive one of the most ground-breaking expansions of the scope of jazz music to date.

With the three other ex-members of Dizzy Gillespie’s rhythm section, vibraharpist Milt Jackson, bassist Ray Brown, and drummer Kenny Clarke, Lewis formed a quartet. With the substitutions of Percy Heath on bass and Connie Kay on Drums, this quartet became the now over 30-year-old institution known the world over as the Modern Jazz Quartet.

A prolific composer and an effortless manipulator of form, John Lewis has brought to the MJQ an unerring musical vision. The compositional and improvisational integrity he gave the group contributed to the MJQ’s rise to a position of prime importance in the history of jazz. Lewis, as musical director for the MJQ, has written and arranged nearly all of the music on the group’s 40 plus albums. The unique quality of his work, which draws on the best of jazz and European musical tradition, has earned him a place among those rare few who can truly be called jazz composers: in the words of noted jazz critic-historian Leonard Feather, Lewis “...stands in the jazz pantheon with the likes of Duke Ellington. Lewis is one of the most brilliant minds ever applied to jazz..." Lewis’s composition for the MJQ has both the reflective, complex contrapuntal quality of the European tradition and the hard-swinging blues sounds fundamental to jazz

Lewis has written for a great variety of ensembles, ranging from the Modern Jazz Quartet to his unique creation during the 1960’s, the Orchestra USA. Lewis’s interest in musical forms and colors beyond the physical limitations of traditional jazz instrumentations led him to form and direct the Orchestra USA in 1962 to 1966. An aggregate of virtuoso musicians, the Orchestra USA was a unique vehicle for new American composition; it was the first orchestral ensemble dedicated to performing with equal beauty and aplomb all American music, whether jazz-influenced, European-influenced, or, as was often the case, a combination of both influences.

Desiring to vary and expand the settings for his work, Lewis successfully composed for diverse groups — such as string quartets and full orchestras — and for theatre, ballet, and motion pictures. He was the first jazz composer to write a major motion picture jazz score: his scores for the films "Odds Against Tomorrow” (directed by Robert Wise) and "No Sun in Venice" (directed by Roger Vadim) have been singled out for their excellence. In addition, his incidental music for William Inge’s play “Natural Affection,” and for numerous TV series and film documentaries received critical acclaim.

Lewis has been a very active recording artist apart from the MJQ collaboration. Since the early sixties, he has recorded numerous albums for Atlantic records and has had great success recording solo work as well. His 1961 solo recording, “John Lewis Piano” was pronounced gold medal record of the year in Japan. He has recorded almost a dozen albums since then, collaborations with such artists as Hank Jones, Lew Tabackin, and Bobby Hutcherson, Svend Asmussen, and Helen Merrill among others.

Lewis has also served as musical consultant for the famous Monterey Jazz Festival every year from 1955 to 1982. He has served education as professor of music at City College in New York for the past 8 years. In recent years, John Lewis has received the highest recognition of the academic world, being awarded with several honorary Doctorates of Music. Since 1980, he has received Honorary Doctorates from the University of New Mexico, from Columbia College in Chicago, and from the New England Conservatory of Music, the United States’ oldest music conservatory.