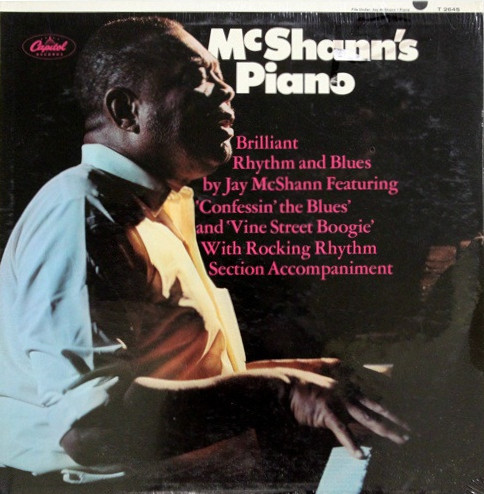 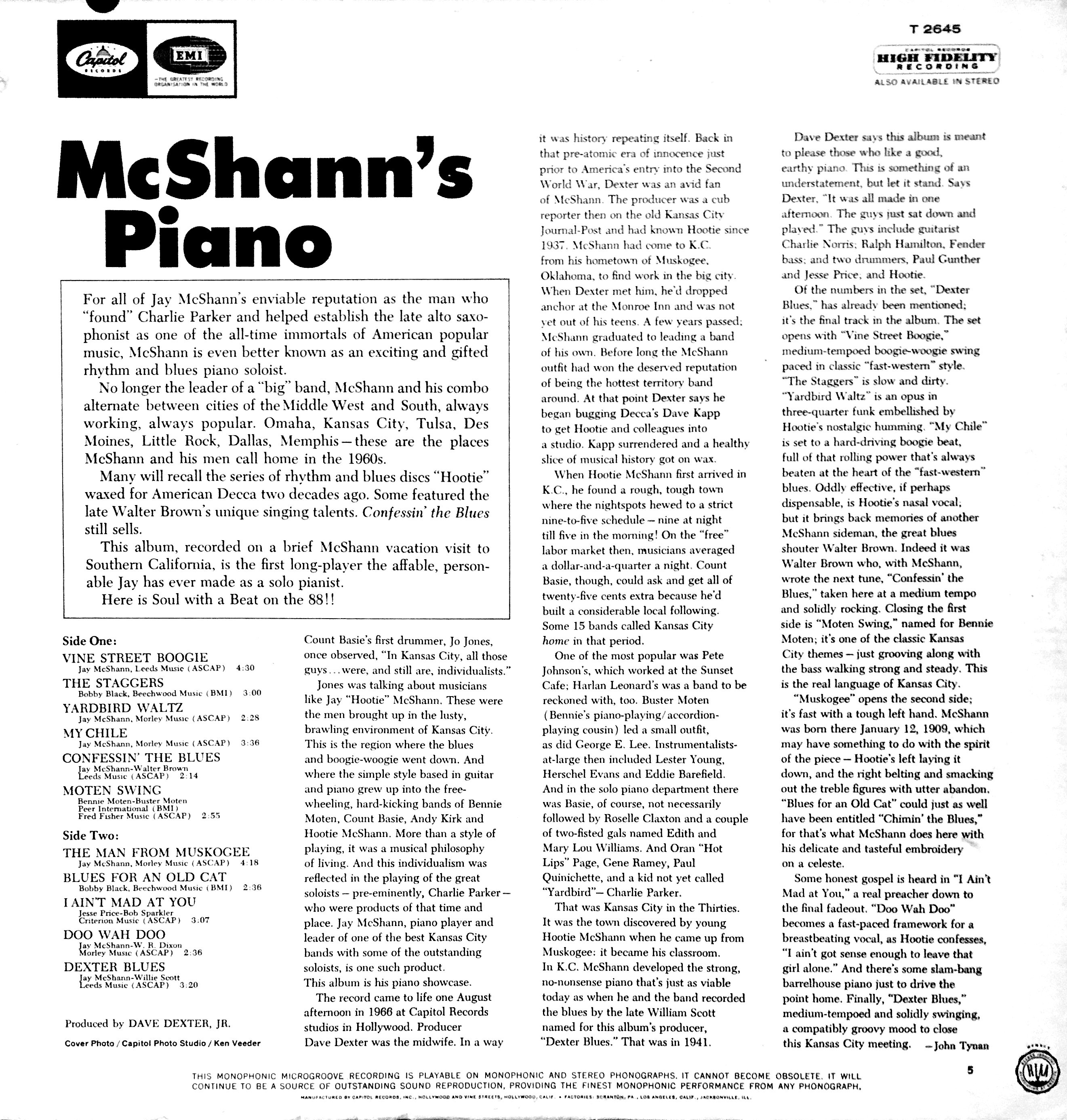 Capitol T 2645
McShann’s
Piano
For all of Jay McShann’s enviable reputation as the man who “found” Charlie Parker and helped establish the late alto saxophonist as one of the all-time immortals of American popular music, McShann is even better known as an exciting and gifted rhythm and blues piano soloist.

No longer the leader of a “big” band, McShann and his combo alternate between cities of the Middle West and South, always working, always popular. Omaha, Kansas City, Tulsa, Des Moines, Little Rock, Dallas, Memphis—these are the places McShann and his men call home in the 1960s.

This album, recorded on a brief McShann vacation visit to Southern California, is the first long-player the affable, person-able Jay has ever made as a solo pianist.

Count Basie’s first drummer, Jo Jones, once observed, “In Kansas City, all those guys...were, and still are, individualists.”

Jones was talking about musicians like Jay “Hootie” McShann. These were the men brought up in the lusty, brawling environment of Kansas City. This is the region where the blues and boogie-woogie went down. And where the simple style based in guitar and piano grew up into the free-wheeling, hard-kicking bands of Bennie Moten, Count Basie, Andy Kirk and Hootie McShann. More than a style of playing, it was a musical philosophy of living. And this individualism was reflected in the playing of the great soloists—pre-eminently, Charlie Parker—who were products of that time and place. Jay McShann, piano player and leader of one of the best Kansas City bands with some of the outstanding soloists, is one such product.

This album is his piano showcase.

The record came to life one August afternoon in 1966 at Capitol Records studios in Hollywood. Producer Dave Dexter was the midwife. In a way it was history repeating itself. Back in that pre-atomic era of innocence just prior to America’s entry into the Second World War, Dexter was an avid fan of McShann. The producer was a cub reporter then on the old Kansas City Journal-Post and had known Hootie since 1937. McShann had come to K.C. from his hometown of Muskogee, Oklahoma, to find work in the big city. When Dexter met him, he’d dropped anchor at the Monroe Inn and was not yet out of his teens. A few years passed: McShann graduated to leading a band of his own. Before long the McShann outfit had won the deserved reputation of being the hottest territory band around. At that point Dexter says he began bugging Decca’s Dave Kapp to get Hootie and colleagues into a studio. Kapp surrendered and a healthy slice of musical history got on wax.

When Hootie McShann first arrived in K.C., he found a rough, tough town where the nightspots hewed to a strict nine-to-five schedule—nine at night till five in the morning! On the “free” labor market then, musicians averaged a dollar-and-a-quarter a night. Count Basie, though, could ask and get all of twenty-five cents extra because he’d built a considerable local following. Some 15 bands called Kansas City home in that period.

One of the most popular was Pete Johnson’s, which worked at the Sunset Cafe; Harlan Leonard’s was a band to be reckoned with, too. Buster Moten (Bennie’s piano-playing/accordion-playing cousin) led a small outfit, as did George E. Lee. Instrumentalists-at-large then included Lester Young, Herschel Evans and Eddie Barefield. And in the solo piano department there was Basie, of course, not necessarily followed by Roselle Claxton and a couple of two-fisted gals named Edith and Mary Lou Williams. And Oran “Hot Lips” Page, Gene Ramey, Paul Quinichette, and a kid not yet called “Yardbird”—Charlie Parker.

That was Kansas City in the Thirties. It was the town discovered by young Hootie McShann when he came up from Muskogee: it became his classroom. In K.C. McShann developed the strong, no-nonsense piano that’s just as viable today as when he and the band recorded the blues by the late William Scott named for this album’s producer, “Dexter Blues.” That was in 1941.

Dave Dexter says this album is meant to please those who like a good, earthy piano. This is something of an understatement, but let it stand. Says Dexter, “It was all made in one afternoon. The guys just sat down and played.” The guys include guitarist Charlie Norris; Ralph Hamilton, Fender bass: and two drummers, Paul Gunther and Jesse Price, and Hootie.

Of the numbers in the set, “Dexter Blues.” has already been mentioned: it’s the final track in the album. The set opens with “Vine Street Boogie,” medium-tempoed boogie-woogie swing paced in classic “fast-western” style. “The Staggers” is slow and dirty. “Yardbird Waltz” is an opus in three-quarter funk embellished by Hootie’s nostalgic humming. “My Chile” is set to a hard-driving boogie beat, full of that rolling power that’s always beaten at the heart of the “fast-western” blues. Oddly effective, if perhaps dispensable, is Hootie’s nasal vocal, but it brings back memories of another McShann sideman, the great blues shouter Walter Brown. Indeed it was Walter Brown who, with McShann, wrote the next tune, “Confessin’ the Blues,” taken here at a medium tempo and solidly rocking. Closing the first side is “Moten Swing,” named for Bennie Moten; it’s one of the classic Kansas City themes—just grooving along with the bass walking strong and steady. This is the real language of Kansas City.

“Muskogee” opens the second side; it’s fast with a tough left hand. McShann was born there January 12, 1909, which may have something to do with the spirit of the piece—Hootie’s left laying it down, and the right belting and smacking out the treble figures with utter abandon. “Blues for an Old Cat” could just as well have been entitled “Chimin’ the Blues,” for that’s what McShann does here with his delicate and tasteful embroidery on a celeste.

Some honest gospel is heard in “I Ain’t Mad at You,” a real preacher down to the final fadeout. “Doo Wah Doo” becomes a fast-paced framework for a breastbeating vocal, as Hootie confesses, “I ain’t got sense enough to leave that girl alone.” And there’s some slam-bang barrelhouse piano just to drive the point home. Finally, “Dexter Blues,” medium-tempoed and solidly swinging, a compatibly groovy mood to close this Kansas City meeting.        —John Tynan

THIS MONOPHONIC MICROGROOVE RECORDING IS PLAYABLE ON MONOPHONIC AND STEREO PHONOGRAPHS. IT CANNOT BECOME OBSOLETE. IT WILL
CONTINUE TO BE A SOURCE OF OUTSTANDING SOUND REPRODUCTION, PROVIDING THE FINEST MONOPHONIC PERFORMANCE FROM ANY PHONOGRAPH.
MANUFACTURED BY CAPITOL RECORDS, INC. HOLLYWORD AND VINE STREETS, HOLLYWORD, CALIF. • FACTORIES: SCRANTON, PA., LOS ANGELES, CALIF., JACKSONVILLE, ILL.